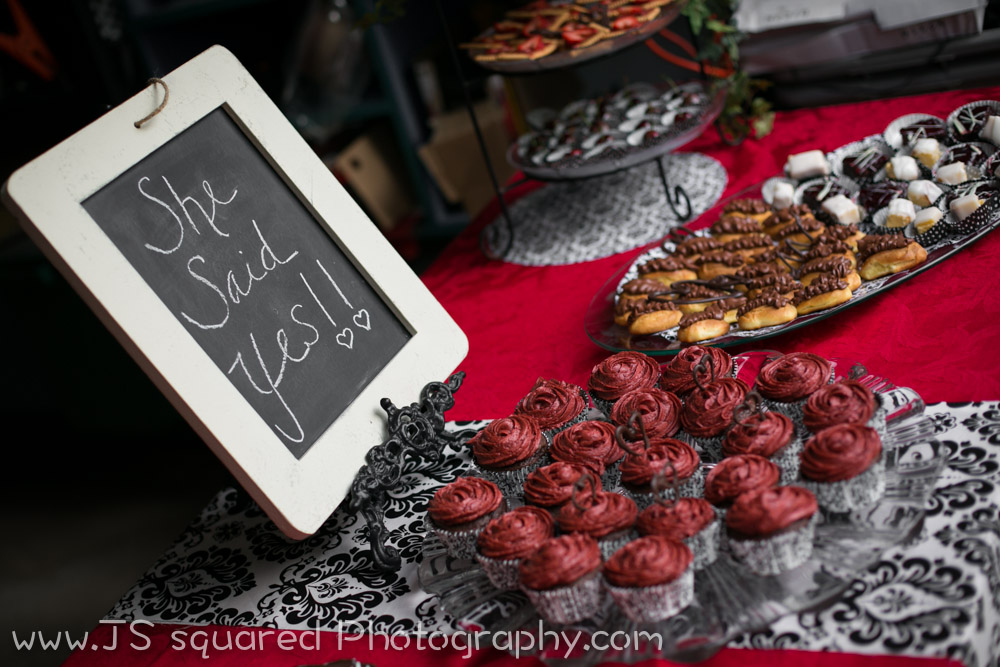 When Joe, our long-time family friend, announced plans to propose to his girlfriend, we went into immediate party planning mode.

Joe had a very specific idea in mind for the proposal. Every significant event in their relationship up to this point had been associated with fire. Their first kiss, their first pronouncement of love, and so on. His idea was to make the proposal by fireside as well. But, he didn’t want just a fire…he wanted FIRE!

Joe’s plan was to bring his girlfriend, Sarah, to our house on the pretext of needing to pick something up from me.  Joe has been very instrumental in helping me with this website so it was a logical excuse.

He made arrangements with a friend to have an enormous bonfire burning so when they drove around to the back of the house they couldn’t help but see it. 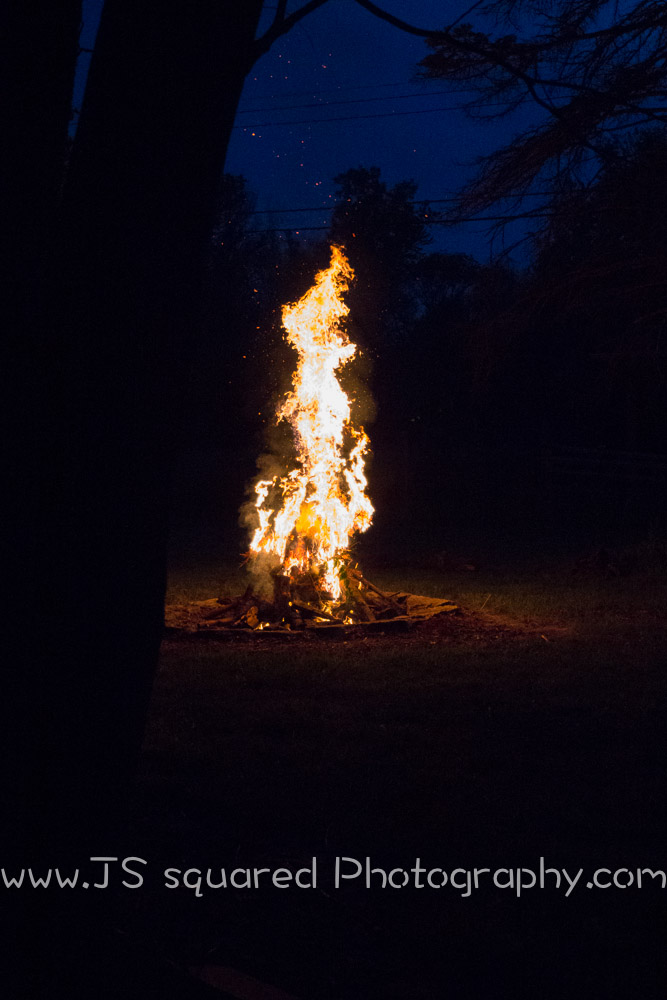 Sure enough, the first thing they saw when they arrived was a raging fire, shooting up to the sky. He feigned concern that the fire might be out of control so they needed to walk back and check it out.

Once by the fire, he bent on one knee and proposed. Of course, Sarah said yes! Pictures of the momentous occasion were captured by a photographer friend  (Jessica from JSsquared Photography) who was hiding behind a tree! 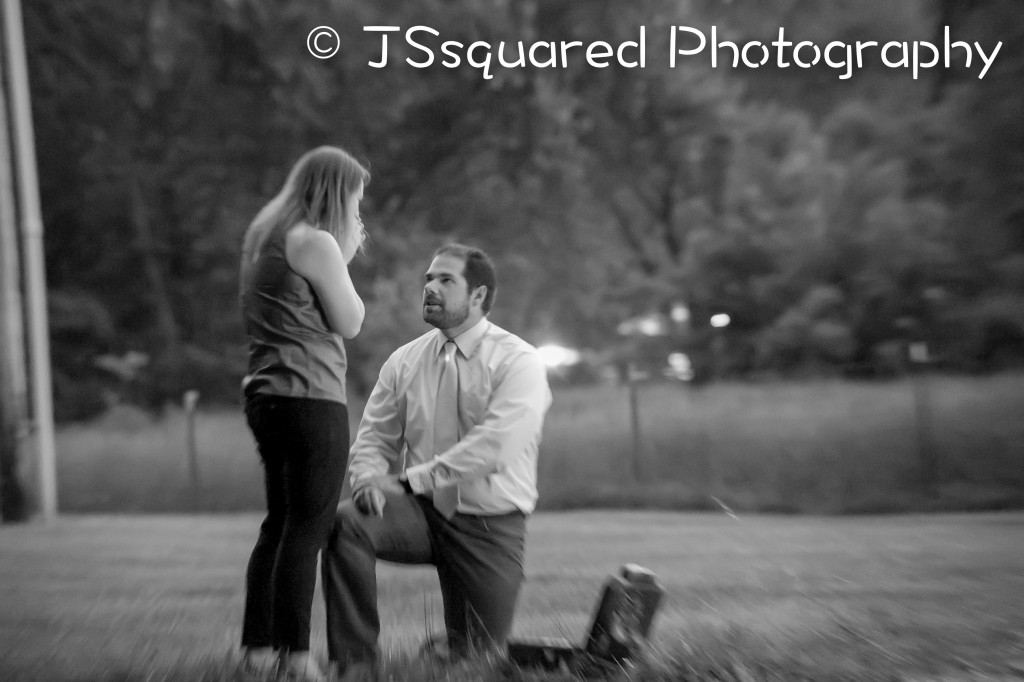 The other part of Joe’s plan for the evening was to have a surprise engagement party immediately following the proposal. He arranged to have their closest friends – and even Sarah’s family from out of town – waiting on the deck. Once pictures had been taken, they walked towards the house where we all yelled “CONGRATULATIONS”.

Once the shock wore off, the party began!

Sarah’s favorite color is red so we decided on red, black and white decor. We wanted the evening to be very elegant so these colors lent themselves well to that.

The guest tables were covered with black tablecloths and black and white fleur-de-lis runners.  The tables were accented with red roses, red candles and red hot candies! 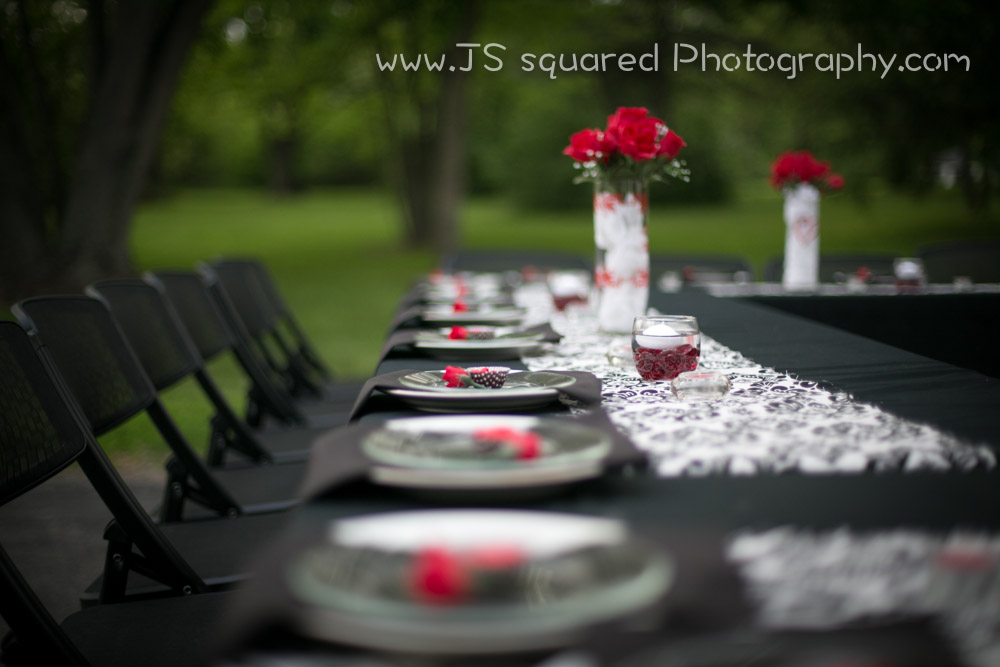 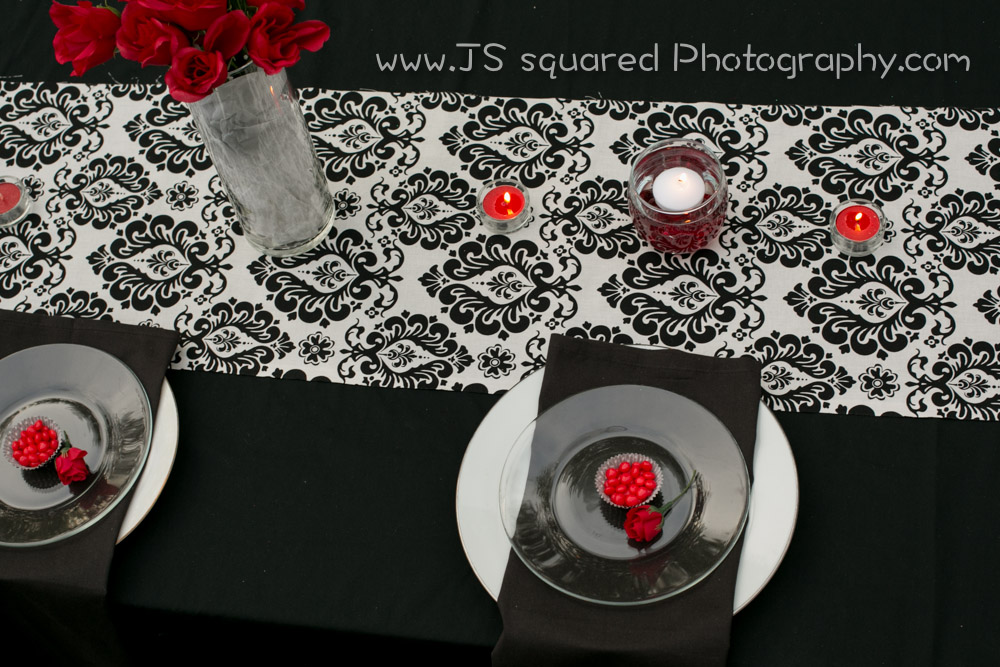 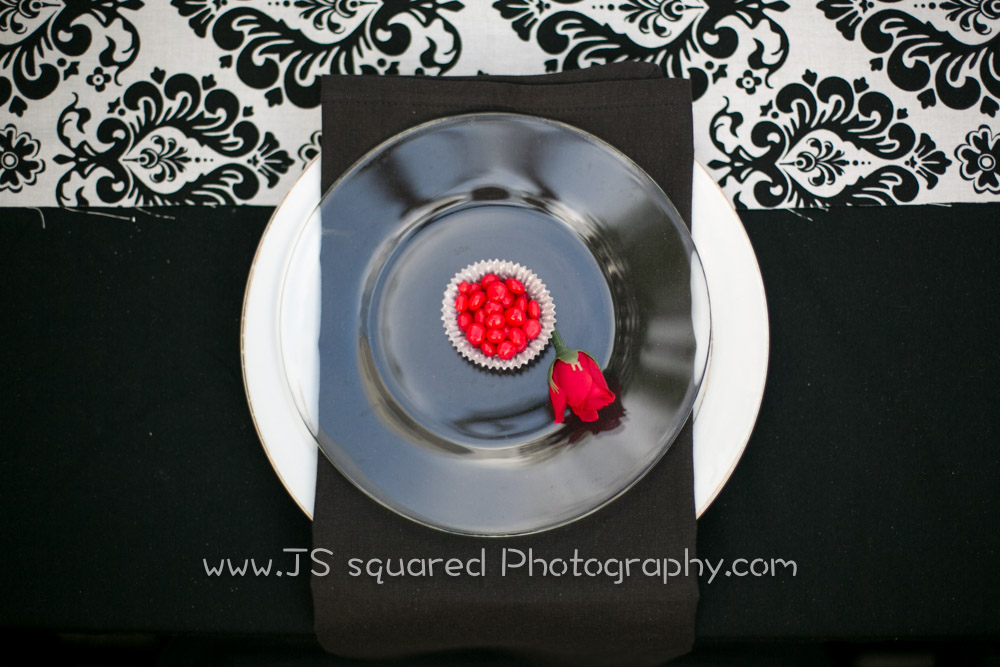 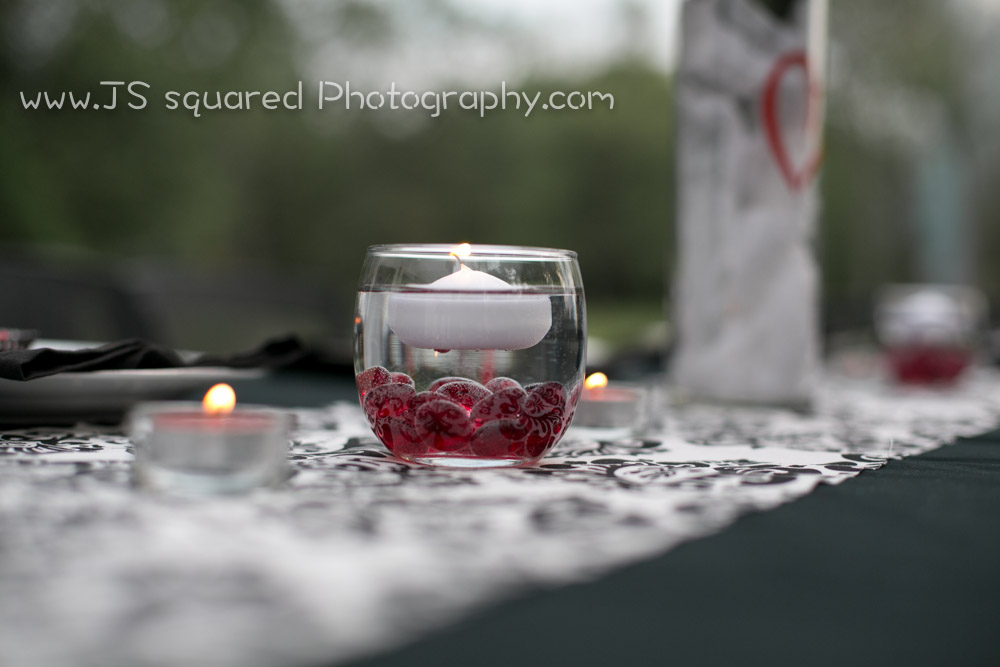 The future bride and groom were seated at a romantic “sweetheart table”. 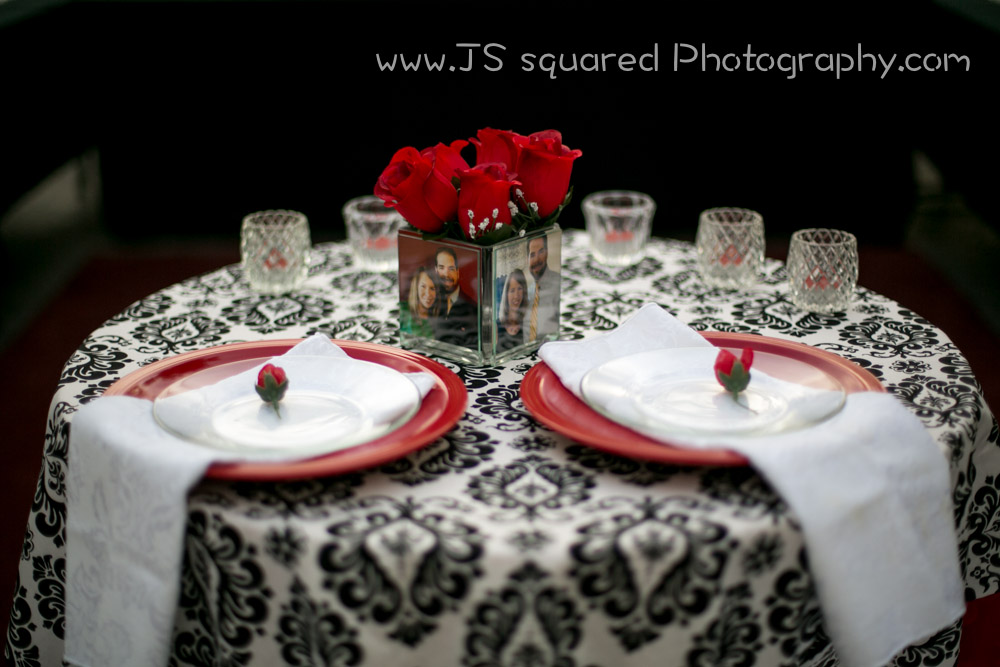 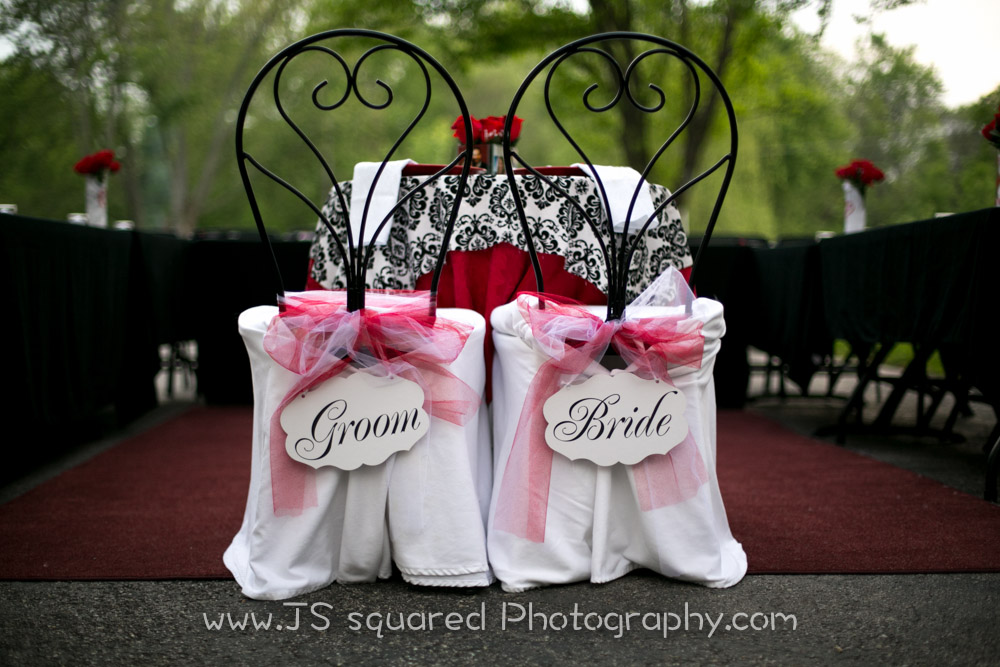 We set up outside and served a selection of delicious desserts that included yummy cupcakes, chocolate covered strawberries and chocolate covered cherries. We also included chocolate mousse in homemade chocolate cups and shortbread cookies with a scrumptious strawberry butter topping.  You can see the recipes for our desserts on Taste the Fairytale. 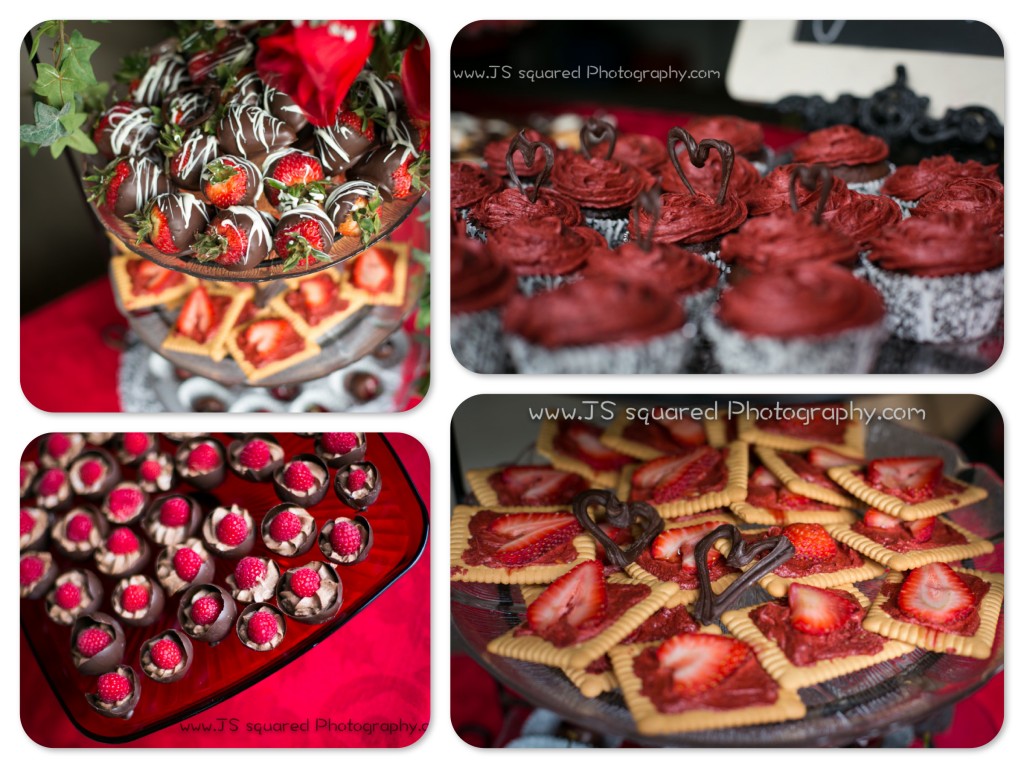 The weather was perfect and romance was definitely in the air.  They are getting married in October so stay tuned for more wedding-related fun!