Mama Bear lived in the Wooded Glen, but the place where she laid her head at night became known as the “Den”.

I am blessed to still live in my childhood home, the Den. Three generations of my family have lived in this house.  We treasure countless memories from decades of living in the same place.  The story of how this came to be is an interesting one…

In 1971, my parents received word that they were to be transferred from California to Indianapolis, Indiana.  At the risk of offending my fellow Hoosiers, they were both devastated by this turn of events.  The thought of moving to the “Midwest” held no attraction to them at all.  My mom cried every time she imagined it.

One particularly depressing day, as she was making plans to begin packing up her family’s belongings for the destination she described as “the armpit of the country”, she had a sudden realization.  Indiana has seasons!  You see, growing up in sunny California can be wonderful, but even sunny weather can get pretty boring.  She had always yearned for autumn and winter – a change of seasons.

She had long attempted to recreate the seasons by making paper fall leaves for autumn decorations and spraying canned snow on our windows to simulate winter weather.  But now it dawned on her that she could experience the true change of seasons; even if had to be in Indiana!

With this new mindset, she and my dad flew to Indiana on a house-hunting trip.  Now keep in mind that living in Southern California means you probably live in a house with absolutely no property or privacy.  My mom used to joke that she could “pass the ketchup to our neighbors” because the houses were so close to each other. As she and my dad started looking around for potential homes, they both started realizing that not only did Indiana houses have much larger yards, but they were also a whole lot cheaper!

On their second day of house hunting, the realtor pulled up to a big white, colonial-style house with pillars and green shutters.  It was the kind of house my mom had always dreamed of and, best of all, it sat on a huge two-acre piece of property.  The house had a long driveway that wound around to the back of the house.  As they drove down that driveway, they were treated to another sight…a six-acre pasture with grazing horses that butted up to the backyard.  It was like a country dream.

If the beautiful house, the huge yard and the horse pasture hadn’t sold my mom – the fact that a storm was blowing in and baby bunnies were scurrying around the yard looking for shelter, sealed the deal. My brother, Stephen, and I had stayed in California while our parents flew to Indiana to look for houses.  I still remember getting the call that they had found our new home.  I was only nine years old but I could hear my mom’s excitement across the telephone wire.

Growing up in Indiana proved to be a wonderful experience.  My brother and I spent summer days playing outside with our friends, running from neighbor to neighbor (which was a lot of exercise since all the houses were so far apart) and investigating all that our rural Indiana neighborhood had to offer – woods, ravines, horses…you get the idea.  There was never any fear of being out alone or after dark, it was truly an innocent and delightful time to be a kid. We spent winters playing in the snow with our friends, trudging down the street in snow boots, sometimes fighting frost bite and just having a great time.

When I was just 17, I met my future husband – Scott Badger.  We fell in love and I knew that he was the man I would marry.  At the young age of 20, I married Scott and moved out of the Den. 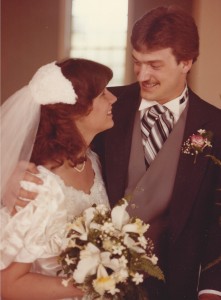 In the early years of our marriage, we lived in apartments and houses. Each time my mom helped me make it a home, while continuing to train me in the art of hospitality, decorating and cooking.  We had two beautiful daughters, Emily and Laura, and it wasn’t long before my mom was bringing them into the “family business”.

My mom and I enjoyed doing these things together so much that we made the decision to move into the “family homestead” and all live together.  My parents were still in the colonial house with the big yard and horse pasture but they were starting to feel a little lost in that big house.  My brother had also grown up and gotten married to a wonderful girl named Sara, so it was just the two of them. 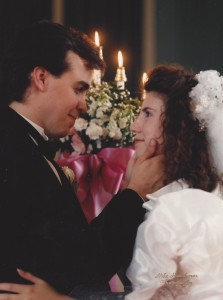 My parents had become “empty nesters” and while many in their position made the decision to downsize, this was not an option.  The Den was the heart of our family and none of us could imagine Mama Bear and Papa Bear living anywhere else.

The solution was that Scott and I would sell our home and move in with my parents.  We would build an addition to the house that would literally create two houses in one.  We each had our own bedrooms, bathrooms, laundry rooms and living space.  But, we were together. 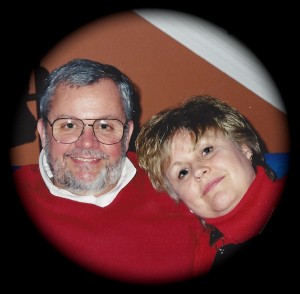