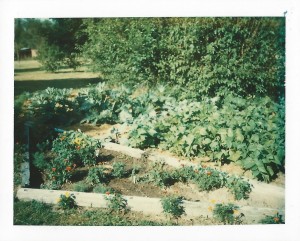 After making the move from Southern California to a two-acre property in Indiana, we felt like we’d become farmers.   My mom promptly began her transition from a California girl to a farmer girl.

The first step was to plant a garden that took up about half our yard.  That may be a bit of an exaggeration but it was at least a quarter of an acre, which is pretty ambitious considering the only garden my mom had ever planted was a small pumpkin patch (I’m talking a 2’ x 2’ plot) in her front yard in California.

Once she picked the spot she believed would have the best soil and sun exposure, she rented a tiller and began to turn up the fertile (she hoped) soil.  She marked off spots for corn, lettuce, tomatoes, carrots, zucchini, sunflowers and herbs.  She was out in that garden every day watering and weeding, tending each new growth with the utmost care.  She loved every minute of it.

Of course, most days she “requested” that my brother and I act as her assistants.  In my mom’s world, we were working the soil and making it productive, but to my brother and me it was just playing in the dirt, which was fine by us.  We may not have been particularly helpful but we were usually right by her side in the garden. 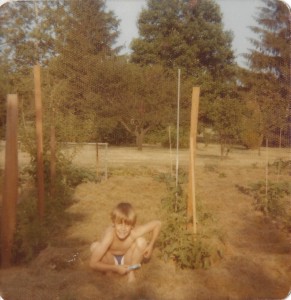 My brother, Steve, was given the task of weeding around the tomato plants

My mom’s lack of gardening experience and unfamiliarity with Indiana weather and soil  conditions resulted in a total lack of preparation for the incredible abundance of this garden.  We had more vegetables than we could possibly eat in our lifetimes! 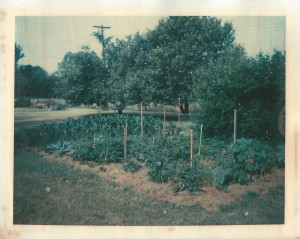 This particular view shows a small segment of our garden 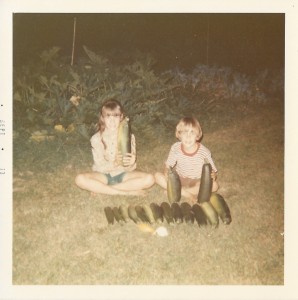 My mom was giddy with delight at her garden’s prolificacy (fancy word for growing a lot of good stuff) and began learning how to can, preserve, bake and anything else she could think to do with nature’s generosity.  Of course, she gave lots of goodies away which made her especially popular with our neighbors.

I realize that many, many people grow successful gardens and are very talented and creative in their use of its bounty.  But, what made my mom unique was how important it was to her to present her fresh grown produce in a beautiful manner.

She couldn’t just grab a wheelbarrow or bag and pick the carrots and zucchini.  That would have been boring.  She had to go down each row with a pretty basket or two and arrange her pickings just so.  She would then set the beautiful basket of artfully arranged, freshly picked produce and take picture after picture.  Who does that?  Perhaps a domestic diva in the making? 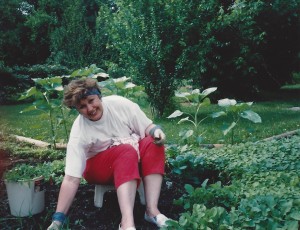 Mom in one of her happiest places